Angular 2 is beta now, what this means is though it is not production ready, the angular team is confident that you can build apps with Angular 2. This also means that when Angular 2 is ready for production there won’t be major changes in the implementation compared to what it is now.

Though one might argue it is still too early, we are suggesting to you that this is the right time to get acquainted with it and get your hands dirty. This will give you a head-start when Angular 2 is ready and when you are ready to develop production apps with Angular 2.

Whenever we get started with a new framework it is of pivotal importance to know how the framework works. So we first need to understand the architecture of Angular 2 and get familiar with some of the key concepts of Angular 2 followed by which we will set up our development environment.

Angular is designed to be modular, an Angular 2 app comprises of several components, which are connected via routing or selectors, these components may have templates attached to it which may display component properties and attach events to interact with the properties. A component may use a service, to access a particular feature or perform a very specific task. Services must be injected into components before they can be used from within the component, this is referred to as Dependency Injection, which has also been a key feature of Angular 1.x.

The above diagram shows an overall overview of the basic architecture of a skeleton Angular 2 app. Lets
look into few of the important concepts in detail.

Angular App comprises of several Modules, a module typically exports something of a purpose. A module is a set of similar utilities that perform a similar task. Typically a module may export a class which we may be imported in other modules. Angular 2 itself ships in large modules, some of them are ‘angular/core‘, ‘angular/router‘ and there are more.

Components are the basic building blocks of an Angular 2 app. A component is typically a type-script class which has a template attached, it usually assembles a screen, ui-element or a route in the application. A component may have child components. Components can be navigated using routing or selectors.
A component has a metadata/ decorator associated which describes the component. Metadata tells angular that the associated TypeScript class is actually to be considered as a component.

A good Angular 2 application is one in which specific tasks are assigned to different services. A component may consume these services to perform these tasks. Typically a component should only deal with the user experience and the display of properties and use services to perform heavy behind the scenes operations. A service must be injected in to the controller before it can be used. This is done via dependency injection.

One of the key features of AngularJS is the dependency injection. Components need to use services to perform tasks, and these services are injected into the component via the injector. The injector provides the instance of the service, so that it can be used in the component. The idea behind dependency injection is to separate out concerns into smaller units and make components depend on these units to perform specific tasks, making your application more manageable and easy to unit test.

Angular 2 application can be written in JavaScript, Dart or TypeScript. For this tutorial we will be looking at a setup with TypeScript.
TypeScript is Microsoft’s extension of JavaScript. TypeScript is a super-set of ES6 which in turn is a super set of the standard JavaScript (ES5). This means whatever that can be done with ES5 or ES6 can be written in TypeScript. In-fact you can most of the times write in plain old JavaScript in a TypeScript program. TypeScripts adds important features like annotations, interfaces and types in addition to classes and modules offered by ES6 on top of ES5. Browsers do not understand TypeScript
and hence it has to be transpired into ES5 and this can be done using the TypeScript compiler.

Note: This article is written for Angular 2.0 beta. The Angular 2 repo is subjected to change, if you find any discrepancies please write to us about it and if possible suggest the fixes

npm will be used as our package manager and our app will run on node. If you have node installed awesome; if not, then head over to the official node website and download the appropriate version.

Now lets get a skeleton app structure from an app that I have already created. I will explain the contents later, for now follow along.
Clone the repository.

Alternatively you can download and extract the code form here.

Once you have completed the above step successfully, you should be able to see the following project structure.

Angular apps are built out of several linked or nested components, our app folder here contains a components directory, which will hold the apps different components.

Assets is a directory which will contain non angular data required by our app, for example style-sheets.

While running the application I encountered a type-error in the chrome browser, to fix this I upgraded the es6-shim version from 0.33.3 (which is recommended by Angular 2 team) to 0.34.4. Details can be found here.
The scripts defined in the file run few commands for example npm start will run the typescript compiler (tsc) and then run lite-server. Commands defined in post install run after npm has finished installing other dependencies.

Some libraries/ framework extend JavaScript environment with features that type script compiler does not support. To make the typescript compiler understand these enhancements we add respective d.ts files in typings.json

This is the complete welcome.ts file. Parts of code are explained below.

To create a component we will need the component class which is shipped with ‘angular2/core’ module. import statement tells TypeScript to import some exported entity from a module.

The @component decorator/metadata describes a component and also tells Angular the the following class has to be treated as an Angular Component. The selector property describes the element name for our Component. So where ever we will use the element <my-app></my-app>, Angular will render our component.

A class contains logic that would display, modify properties to be displayed to the user in the UI. We are exporting the class, so that we can import it some where else.
Our WelcomeComponent contains a constructor() function and a setDisplayName() method. A constructor is defined with the constructor key word in TypeScript or in ES6.
In Angular 1 we would do using a controller what a component class does in Angular 2.

We won’t be going into details on events and property bindings in this tutorial, but here is some explanation to above template.

In index.html we are loading our required libraries and configuring systemJS.
Systemjs is our module loader. By defining packages in System.config we are setting systemjs setting for files loaded from ‘app/’ folder. We are setting the defaultExtension to js since we will be loading files transpiled into .js from .ts. Systems.import('app/main') loads the main.ts file where we are bootstraping the application, we will have a look at main.ts below. Systemjs configurations may deffer depending on the project folder structure. You can lean more about Systemjs configurations here.

Finally we are loading our welcome component by placing the my-app selector. If you remember we named our component element as my-app

Here we tell angular to load our WelcomeComponent i.e the root component.

Before running the app we need to do one more thing that is left out. Install all the required npm packages. Fire up your terminal and navigate to the working directory and run the following command.

This may take a while, during the installation you may see some warnings but that is fine.
Next, to run our first Angular 2 app execute the below command.

This would fire up the lite server and run our app in the browser.

So here we have our first app with Angular 2. Download and play around with the code and explore new stuffs, you will learn more when you will try it yourself.

This tutorial intended to acquaint you with Angular 2 and set us up on mark to build larger apps with it. We have barely scratched the surface and there is more to learn. Stay tuned we will go into further details and build real apps with Angular 2 in coming tutorials. 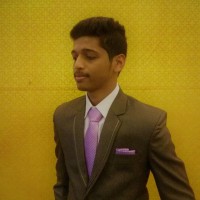